The 3 C’s of International Trade

Get Started Follow this link to leave us your contact information, schedule a free consultation, or fill out an application. Learn more»

Sit back, close your eyes, and imagine living in a world without international trade: no soft cashmere sweaters from Italy, no shiny new car from Germany, and no delicious red wine from France. Wait! No imported red wine? Can you imagine it? Neither can we.

Luckily, we live in a world that is dependent on international trade, and the ability for consumers to get their hands on all those wonderful imported goodies is easier than ever. But what does it take to get those goods to the U.S., and how does a company know they’ll get paid for the goods they’re supplying? That’s where credit analysis comes into play. (You didn’t think this was about how to purchase that French red wine, did you?)

In a previous blog about the 6 C’s of Credit, I discussed how to evaluate the creditworthiness of a company. The 6 C’s can be easily applied across borders, but there are just a few additional C’s to consider in international trade. Those C’s include: Country, Currency, and Culture. 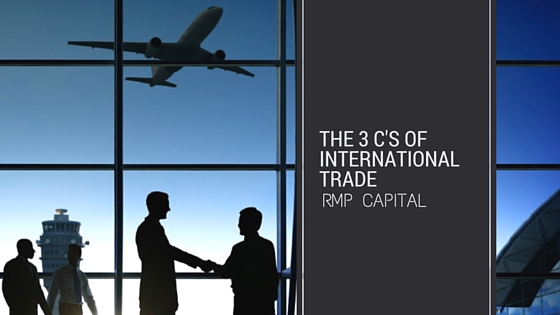 First, let’s look at Country. While the strength of a company is important, the strength of a country is also important. In analyzing a country, it’s imperative to consider the laws of the country, the current economic environment, and the current political environment. Why? Because a company is bound by the country in which it resides, and anything affecting the country will affect a company within. This is a time when watching the news or reading up on international affairs pays off. Avoid asking an individual who’s visited a specific country for his or her opinion since personal perception and reality typically don’t line up. Instead, use the many other effective resources that are available.

The next C is Currency. When dealing with different countries, you also deal with different currencies. In fact, there are over 150 currencies throughout the world! It’s important to take your time to research the country’s currency strength. Consider the exchange rate and history of changes in valuation. If there were major changes, consider it a red flag. Earning a sale is great, but getting paid is better.

Lastly, let’s look at Culture. Culture risk is addressed by learning how to communicate effectively, both verbally and non-verbally. When traveling to a country, consider what is culturally acceptable. What we view as acceptable in the U.S. may not be viewed the same abroad. For example, a “thumbs up” gesture in Iran is viewed as obscene, while in the U.S. it is a sign of approval. Doing your research before traveling will minimize communication obstacles and the potential to offend others.

One of the best things about international trade is the ability to have access to any type of commodity you want without leaving the comfort of your homeland (ahem, French red wine). Of course there are processes to consider when evaluating the creditworthiness of international companies and countries, and I hope these C’s can provide the guidance you need to make an informed decision.